The Lives of St George of Cappadocia

... in medieval French and Occitan← Back to saints 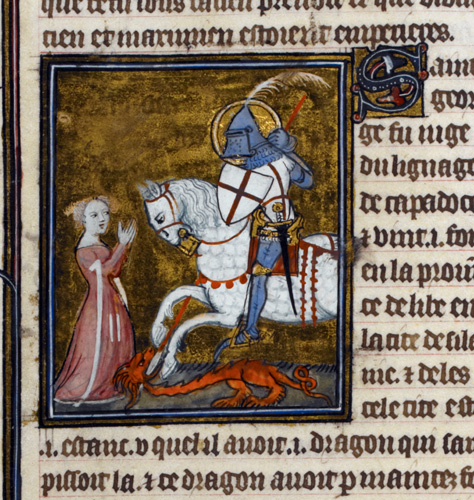 The tale of a soldier from Cappadocia called George, supposedly martyred in the third century at the hands of a wicked pagan prefect, was known in the late medieval West in two major versions (sometimes called Y and Z). George’s well-known encounter with the dragon was a late addition to the story, made famous in the thirteenth century by Jacobus of Voragine, the compiler of the Latin anthology of saints’ lives known as the Legenda aurea (a ‘medieval bestseller’ if ever there was one). Late medieval audiences quickly came to expect a monster when they read or listened to a biography of St George, and so the story gradually wormed its way into the two different families of vernacular accounts of the saints’ martyrdom.

In addition to the metrical versions in French and Occitan, there are more than a dozen surviving prose lives that tell of George and the Dragon. Most, but not all, are renderings of Jacobus of Voragine’s ubiquitous Legenda aurea. These lives are listed below, classified initially by language and medium (i.e. verse/prose) and subsequently by source and approximate date of composition.

Transcriptions of each previously unpublished version will appear in due course. Use the buttons at the top to toggle between diplomatic and regularized editions.

[A] Jacobus of Voragine, Legenda aurea